The rehabilitation of the stadium includes, among other things, the construction of new stands, boxes, six bathrooms for the spectators, and dressing rooms with showers, lockers, and toilets for the players.

PALENQUE Tabasco (Mexicans Against Corruption) – The Ministry of Territorial and Urban Development (Sedatu) assigned this Monday, January 11, a contract for 89 million pesos to renovate the stadium of the baseball team Guacamayas de Palenque, whose founder and the director is Pio Lopez Obrador, brother of the President of Mexico.

The contract was granted to the company Alz Construcciones SA de CV, originally from Tuxtla Gutiérrez.

The award was granted in a second-round because, in the first round of the bidding, Sedatu disqualified the 26 bidders who competed for alleged noncompliance with the requirements established in the call bases.

The evaluation committee of Sedatu rejected both proposals due to technical aspects, such as not having submitted the curricula vitae of the personnel proposed for the work and for not having accredited experience in similar works.

The stadium’s rehabilitation includes the construction of new stands, boxes, 12 premises distributed on the sides of the entrance hall, six bathrooms for the spectators, dugouts for the teams, and dressing rooms with showers, lockers, and toilets for the players.

The contract also contemplates improvement works in the sports unit where the stadium is located. Lights will be placed on floors and posts, LED lines suspended on ceiling lights, reflectors for the court, and updating for the baseball stadium’s exterior lighting.

The current built area of the sports facilities is 5,793 square meters, and the expansion will be over 15,372 square meters, according to the plans consulted by Mexicans Against Corruption and Impunity (MCCI).

The stadium is owned by the municipality of Palenque, as stated in its real estate inventory for 2020.

AMLO trains with the team
On November 13, 2018, two weeks before taking office as President, López Obrador trained at the Palenque stadium and wore the Macaws’ uniform, as can be seen in photographs shared on the team’s social networks. During that visit, he committed himself to support baseball in Palenque, the Chiapas municipality where he has his ranch. 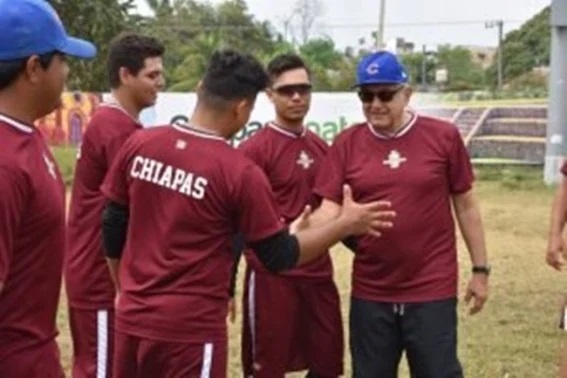 Guacamayas de Palenque has been four times champion of the Tabasco Professional Baseball League. It is currently a branch of the Olmecas de Tabasco Club, which participates in the Mexican League.

Pio’s Team
The President of the baseball team is Pío López Obrador, brother of the President. When Pío registered the Chiapas Macaws trademark in his name on July 28, 2017, he gave the team’s address as Calle Jiménez 88, in the San Juanito neighborhood of Palenque, which corresponds to the baseball stadium that will be modernized with federal resources. 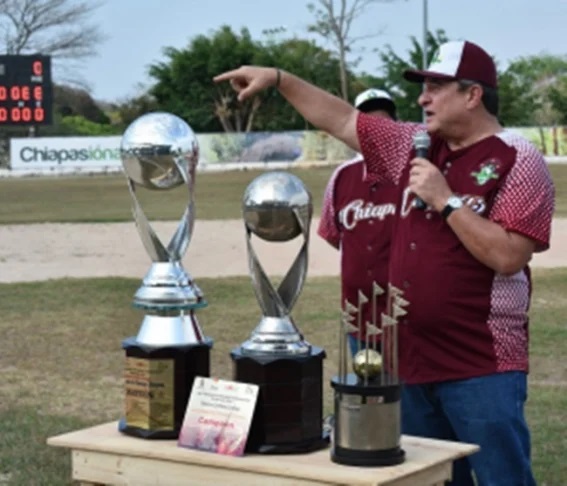 In a letter he sent on that date to the Mexican Institute of Industrial Property (IMPI), he mentioned that he had been President of the team since its foundation in March 2015.

“Pío López Obrador, in my own right and under protest of telling the truth, I come to declare in my capacity as President of the Chiapas Macaw Baseball Team (also known as Palenque Macaws), that there is no type of society or civil association that can represent the team that participates in the Professional Baseball League of Tabasco, For this reason, and given the powers with which I have held the position of President of the team since its foundation, as shown in various advertisements in the different media, and in order not to leave both the name and the logo of the team in question in a state of defenselessness, I have come to request the registration of the trademark,” the letter mentions.

The concession of the ownership of the trademark was granted on November 9, 2017. The registration of the name of the baseball team had been requested in August 2015 by César Augusto Juárez Ugalde, who was the private secretary of Governor Manuel Velasco. However, the IMPI denied it.

Assignment in the second round
The winning company was created on July 3, 2002, in Tuxtla Gutiérrez, Chiapas. Its majority shareholder is surveyor Angel Heraclio Lara Zúñiga, originally from Simojovel, who is associated with builder Alberto Zúñiga Penagos.

The contract was assigned to him in a second-round because, in the first round, the bidding was declared void.

There were 26 bidders in the first round of the competition, although 22 submitted their proposals in person, of which 15 were consortiums formed by two or more companies.

The lowest proposal in that round was submitted by the consortium formed by Obras Civiles de Antequera, Next Time SA de CV, Grupo Constructor Velacor, and Grupo Juracán SA de CV, who proposed to execute the work for 56 million 182 thousand pesos, 33 million less than the construction company that was finally assigned the contract.

In contrast, the most expensive proposal in that first round was Técnicos de Oaxaca SA de CV, which intended to charge 185 million 412 thousand pesos for the work.

On December 1, 2020, the contestants were summoned to the board room of Sedatu in Mexico City to announce the decision, which was declared void because the evaluation committee considered that all the bidding companies had failed to comply with any of the technical, legal, or economic requirements established in the call for bids.

This forced the bidding process to be carried out again. On December 18, 2020, a new opening of proposals took place, with the representatives of 22 bidders, three of them integrated as consortiums.

In this second round of the bidding, the cheapest proposals were made by the companies Promoción y Distribución Cinco SA de CV, for 76 million 964 thousand pesos; Alz Construcciones for 89.3 million pesos; Los Cedros Construcciones and Lax Constructora for 89.4 million pesos.

While the highest bids corresponded to Construcciones Centurión in joint participation with Construcciones de México for 119 million 771 thousand pesos, a similar amount to that proposed by Tecnología Urbana Aplicada SA de CV.

The decision on this second round of the bidding was scheduled for December 23 but was postponed until January 6, 2021. That day, however, it was decided to postpone it again to Monday, January 11.

With Product You Purchase

Oregano, a herb rich in flavor has other uses and properties – The Yucatan Times